It's no big secret.  I'm not a fan of Ron Paul zombies, but I am a fan of zombie movies.  For your amusement, here is a link to some of my new zombie products on CafePress: 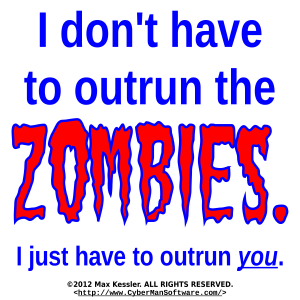 This is based on an old joke.

Two guys were in the woods, when all of a sudden, a bear starts charging toward them.  They instinctively start running.  One guy said, "This is ridiculous.  We can't outrun the bear."

Remind you of the two party political system?  A candidate doesn't have to be good, just less evil than his/her opponent.  Stay tuned for the upcoming Freedom Roc's candidate endorsements.